ISRO launches 104 Satellites at a time 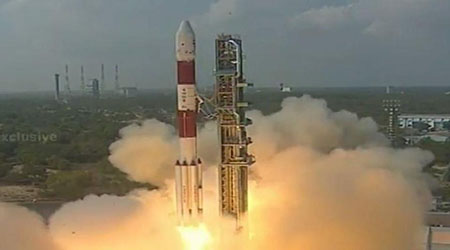 India has set a new world record in 15th February 2017 by launching 104 satellites at a time from Satish Dhawan space centre at Sriharikota in Andhra pradesh on Wednesday morning. This was ISRO’s first space mission in 2017 and one of the most difficult mission it has carried out.
The space agency has launched its countdown in polar satellite launch Vehicle (PSLV)’s 39th flight on Tuesday on Mission readiness review committee granted the permission to take off then it started its journey towards space and created a new milestone in the history of space programme all over the world.
The PSLV –C37/ cartostat2 series satellite mission included the primary satellite (cartostat-2) and 101 international nano satellite. Two off the satellites are of India’s own built INS-1A and INS-1B. The total weight of PSLV Cartosat 2 series for Earth observation is 714 kg. The other is followed by INS 1A and INS 1B after it reaches the polar sun Synchronous orbit after that 103 satellites along with it weight of 664 kg in pairs.
ISRO scientist had used the XL variant rocket as it is the most power rocket to carry on the space mission successfully. More over Chandrayaan is also sent using this rocket for the Mars Orbiter Mission.