There are no bridges over the Amazon River. 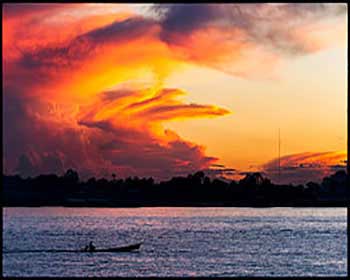 In South America the largest river of the world is situated known as the amazon with largest length and it discharges largest amount of water per second.
The head waters from Apurimac River of Nevadu Mismi is considered as the Amazon’s most distant source of water until 2014 study found it to be Cordillera Rumi Ruz at the headwaters at Mantaro river at Peru. The Mantaro and Apurimac confluence and with other tributaries from Ucayali River. The Mantaro and Apurimac confluence and with other tributaries Ucayali River, which in turn confluence Maranon River upstream of Iquitos, Peru then this small river confluence together to form Amazon which passes near Brazil. Brazil. Brazilian calls Amazon River as confluence of water.
Amazon covers 705000square kilometres and has the largest deposit of river water to the oceans that is almost 20% of global water submission to the oceans but surprisingly no bridges were built above it to make the transportation over this or road ways.